According to a press release from Image Comics from last Friday, Image Comics announced that Sweet Paprika will also have comic series debut in July of 2021.

In case you are wondering what Sweet Paprika is, what’s it about and the project itself, we got you covered. The series is about a workaholic named Paprika who is very successful but has no time for not only herself and anyone in general until she meets Dill. The series as stated in the press release is reverse roles of Bridget Jones’s Diary meets Sex in the City with a twist of The Devil Wears Parda and a pinch of eroticism. The Sweet Paprika Project was announced a while back with the announcement of Sweet Paprika, an animated project that will be done by Arancia Studio and Grey Ladder Production and will have Emmy-Award winning director Gabriele Pennacchioli. 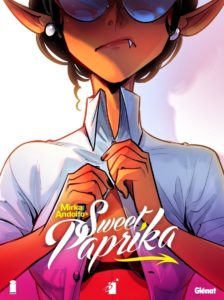