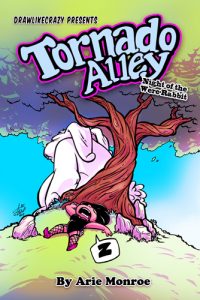 It starts where we meet the main character, Mainasha waking up in a hilltop and falling down and hit a rabbit by chance. The rabbit bites her, and we see time pass and its night time. She goes into a town full of veggie people, yes veggie people and interacts with them. After some bad choice of words, everything thinks she some kind of a cannibal and out of the blue she turns into a playboy bunny of some kind and then its morning. We see Mainasha waking up still in her suite goes back into the veggie town, which looks like hell pass by and she off to help the town only to remember she ate the town. It turns out it was all a story about how Mainasha became a vegan to her cat, Socks the Stinky Kitty, who cries about ever eating BBQ Chicken ever again and ends on a funny note.

Tornado Alley: Night of the Were-Rabbit is a great book. It funny with great artwork that goes with the story and it shows Arie Monroe enjoys her work. She has a great style to match with what the story told; funny, easy on the eyes and anyone can pick up and read. 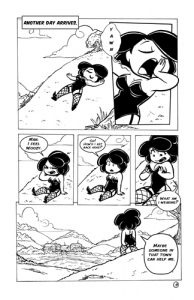 If you want to get any of Arie Monroe works you can find it here.

So what do you think of Night of the Were-Rabbit? Let us know in the comments below!