Ahoy me mateys Captain Cats here! Today we have an exclusives interview with Indie comic writer and artist Candy Briones, creator of The Good, The Bad and The Bunny and Taco El Gato!

Captain Cats (CC)– So please tell everyone who you are and how long you been doing comics? 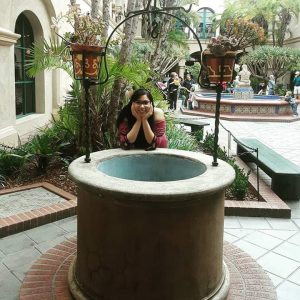 Candy Briones (CB) Hi! My name is Candy Briones! I’ve been doing comics since I was 12. But I got pretty serious about them in 2013 when I made Taco El Gato is SUPER-TACO! It was a webcomic. Ten issues long. It was pretty fun.

(CC) So how long have you been in the indie scene?

(CB) I guess I’ve been in the indie comic scene since 2013 with Super-Taco!

(CC) Lets talk about The Good, The Bad, and The Bunny, How did it come to you? What was your thought process going into this? Is it available digital, physical or both?

(CB) The Good The Bad and the Bunny came to me very slowly through the years. First, it started with a drawing I did in 2011 of a Viking woman with a little bunny rabbit and some goblins around them, and in the distance, there is a castle where all the goblins are coming from. At the time I didn’t know why I drew it, I just did. And in my head, I knew that the castle was not the Viking woman’s it was the rabbit’s. The cat character, Blackie Chan, is based off my real cat with the same name. He is a pretty awesome cat. Most of the cats in The Good the Bad and the Bunny are based off real cats, haha! Other people’s cats. As for the Prince character, Edwín…this one is a little weird…but this is why this character is my one of my favorites. Years ago, I had this…VISION, if you will, XD HA! I don’t know how to explain really, but I think The Good the Bad and the Bunny came to me from my subconscious, really! Because- …I have to break this down… Queen Beatrixe and Bernabie the Rabbit >>>> Jessica and Roger Rabbit!

That’s one of my favorite movies of all time! Next, my cat. No explanation. He’s my cat! And with Prince Edwin…This character came to me, so subconsciously, it’s insane. I was at work, and my mind wanders a lot! But this time, it was so cool, because it was so vivid. I saw a castle tower with a big beautiful balcony. A thin, tall prince was looking out with a very troubled but mysterious look to him. I couldn’t see his face and the wind blew ever so gently; I could see it moving the sheer curtains around him….it was, like, so magical. Lol. But he felt like an anime version of Michael Jackson! No joke! This is around the time he had passed away.

He was on everybody’s mind. It makes sense now, but I didn’t put it together at that moment. I didn’t even put the Prince character on paper until years and years later. The design of him isn’t exactly like what I saw in my head, but it’s very close. This is why I can’t have office jobs. Back then I was a casual MJ listener, but because I got so intrigued by this character, I looked into MJ closer, and I found out what a wonderful person he really was, and he was so terribly misunderstood.

After making the characters, the process of making the webcomic and visual novel game has been very fluid. The story wrote itself!

(CC) Why did you choose Fantasy for the setting?

(CB) I choose a fantasy setting by just going with the flow. In fantasy you can do so much, I didn’t want limitations…some but not much. Plus, it would give me a chance to explore with different timelines and cultures, even mix things. For example, Trapik Snø is a place that’s tropical during the day and snowy at night. Or with Anémona I was inspired by one of the only castles in Mexico, Chapultepec Castle. What if Mexico had castles, knights, Kings, and stuff? That’ll be so cool!! I think in fantasy we can do that.

(CC) Can you tell us about the main characters?

(CB) So Bernabie the Rabbit is the sweetest little rabbit who wants to help his rabbit brethren from terrible circumstances in his kingdom. He is very loyal to the King of Anémona and Prince Edwín. You see him go through this journey as a scared pray animal to find two leaders who can help him. Beatrixe is a Queen who is very

stubborn and proud, Queen. But she still leads her kin the way her Father wanted, badly because you see, she has a crippling fear of the ocean…and she’s a Viking! Blackie Chan is a warlord of a clan, he runs it and is a good protector, but he keeps his distance from everyone. He is a selective mute and has a deep hatred of humans. 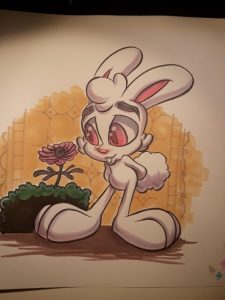 (CC) With the First Issue out, are you currently working on issue #2 and or working on another project?

(CB) The Good the Bad and The Bunny Webcomic is the intro to the game. It’s a visual novel…sorta like choose your own adventure. It will have a good, bad or a really good ending depending on what you choose. In the game, depending on who you play as, you must get the other two characters to trust you. Comics are fun, but I wanted to try something new that was more interactive, with music and more emotion. The webcomic is free to read online on webtoons. I’ll give you the link. I do plan to make physical copies for cons. And in the future maybe make more comics based off the characters. The game will not be out for a while, but you can be kept updated if you follow me on social media. But when it’s finally out, it should be available to download on google play, app store, steam and anywhere I can get it on.

(CC) I also remember another one of your works which I love and that is Taco El Gato. Want to tell everyone about Taco El Gato? Also is there any other upcoming adventures for Taco El Gato?

(CB) Yes, I love Taco El Gato. I had that character since I was 12. I do plan to make a brand new series with Taco El Gato, but unfortunately, I had to put Taco to the side for now due to publishing rights. I’m seeking legal advice before continuing. I hope to get my rights back; it’s pretty painful. But the character is mine, that is why I made my comic/game “studio” name Taco El Gato Comics. He will be my mascot! 😀

(CC) Do you have anything you like to say to the readers?

(CB) Hi readers! Thank you guys for checking out this interview and hopefully it sparked some interest in my comics and upcoming game!

You can read The Good The Bad and The Bunny Webcomic on Webtoons!